Adriana is a first year Master’s student in the Department of Afro-American studies. Arthur graduated from Ball State University with a Bachelor’s in Sociology and a minor in African-American studies. Her research interests include Black Women’s history and literature; Black women’s resistance, embodiment, and conceptualizations of freedom. Her interests are grounded in the ways Black women embody resistance and the negotiations they make for their agency, autonomy, and freedom. She’s interested in how Black women engage in various modes of literature, media, and art as practices of resistance to hegemonic femininity and misogynoir. She is also interested in how enslaved women were conceptualizing various meanings of freedom and the intellectual/spiritual histories and genealogies they formed.

Taylor L. Bailey (she/her) is a first year student in the Afro-American Studies MA and Literary Studies PhD Bridge Program. She is from Chicago and completed her undergraduate degree in African & African American Studies and English Literature with a concentration in fiction writing at Washington University in St. Louis. Her research interests lie at the intersections of Black feminist thought, girlhood studies, and 20th century literature— more specifically how catharsis and coping mechanisms in the forms of homosocial bonding, artistic outlets, addiction, etc. serve as a way for Black women and girls to negotiate their existence within an equally anti-Black and misogynistic society as it manifests in literature.

Vanessa Jubai Brown is a first year Master’s student in the Department of Afro-American Studies. She is originally from the New England area (Vermont and Massachusetts) and graduated with a Bachelor of Arts in English with a concentration in Race Studies in Literature and Music at the University of Maine at Farmington. Her research interests align with analyzing 20th and 21st-Century Black Literature with the arts, particularly within the ideas, instrumentation, and sounds of Black music throughout history (with a strong interest with Hip-hop and Contemporary R&B). She is also interested in finding ways to connect philosophy (specifically ontology) to the ideas of Blackness and identity alongside her analysis of literature and music. Outside of her studies, she is also a performer. As a singer, she hopes her connection to the arts will help her ground her within the exploration of literature, music, and philosophy.

Gavin is a first year Master’s student in the Department of Afro-American Studies and plans to pursue a PhD in History. He is primarily interested in the operation of American race-based slavery and the many heroic ways in which enslaved people fought against being commodified. He is particularly interested in the nonviolent forms of resistance that enslaved people engaged in as these survival strategies are sometimes given insufficient attention.

His interests are grounded in the reality that the resistance of enslaved people defined the institution of slavery just as much as the actions of slaveholders did. He is also driven by uncovering the ways in which enslaved people strove to keep their identities alive in the midst of nearly constant physical and psychological violence. 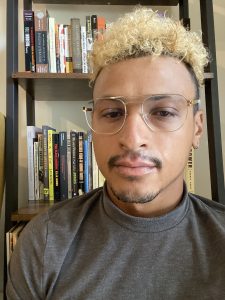 I am a first-year MA student and PhD student in Literary Studies studying 19th and 20th Century Black Literature. My research is focused largely on blackness in the American imagination, specifically a theory of Black Ventriloquy in which whiteness is projected through a manufactured Black Other. In this research, I examine film, music, literature, and culture to express different modes of Black Ventriloquy. I’m originally from the East Coast, New York and Virginia, and completed my B.A. in English at The College of William & Mary before teaching high school English for two years in The Bronx.

Sebastian Asahel Melmoth (he/him or they/them) is a first year Master’s student in the Afro-American Studies and Library and Information Studies programs. He recently graduated from Alverno College with a Bachelor of Arts in English and History and concentrations in postcolonial literature and the History of Western Imperialism, Colonialism, and Atlantic Slavery. His research interests engage methodologies from the fields of African American Studies, Postcolonial Studies, Gender Studies, Library Studies, Comparative Literature Studies, and Film and Visual Studies to build a nexus of inquiry that complicates our impressions of the past and its scholarship. Lately, his academic interests are motivated by archival tensions with its objects, ideologies, and researchers. The advocacy and forming of accessible archive and special collections spaces for Black, Brown, and LGBTQ+ communities is his guiding objective.